It's book review time! Here's the thing: I know we're not quite at the end of the month, but the last 2 books I read this month were awful, so I'm throwing in the towel and diving into the last Harry Potter book now!
This month I read 6 books---one might even be one of my favorites for the year. At the end of this post, I am including my list of books I've read this year with stars by my faves. Here we go!
1. Look Alive Out There by Sloane Crossley: 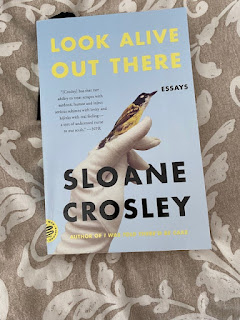 This book is marvelous. I read the Sloane's first book of essays, "I Was Told There'd Be Cake" as a senior in college and to this day, it's one of my favorite books. She's written another book of essays and novel too (I've read them all), but this one came across my radar on a Buzzfeed list of books to read during quarantine. This book is hilarious, dry, sweet, heartfelt, and best of all, thought provoking. If you like books of essays, this collection is a gem. She writes about her noisy teeneage neighbor, her hike in the Himalayas, freezing her eggs, meeting her porn star uncle and more. Somehow her daily life is both totally outrageous and also ordinary and relatable. One of her essays is about how her neighbor starts growing a vineyard, she writes, "The highest compliment bestowed upon fruit is that it tastes like candy. Pineapple gets this a lot. Raspberries. Starfruit's certainly sick of hearing it. What's meant to be a compliment to fruit is actually an insult to candy. I don't know what kind of Eastern bloc chalk pellets people have been eating, but grapes do not taste as awesome as candy. Except for these. They were like little clown cars of sugar and flavor. And they were accessible from my bathtub where I could reach my arm out, snap off a cluster, and knock my head back like a Greek goddess." See? Not about much but beautiful, funny prose anyway. This was a great read.
2. Harry Potter and the Half Blood Prince by JK Rowling: 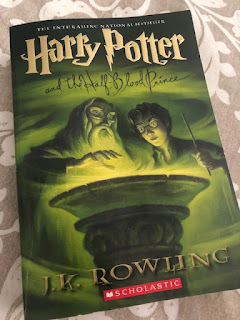 Those of you who are already on board the Potter train are like, "Girl, late to the party, much?" I know. I know. I'm finally getting around to reading these (my 2020 resolution). I don't even know what to say other than these books really are fantastic. It's so nice having a book where you can truly get lost in another world, and Hogwarts is a place I don't mind hanging out at. I feel the tension building and book 7 is in my hot little hand I can't wait to dive in and see how this all wraps up. The ending of this one was totally unexpected and I immediately had to text my Potter-loving pals to discuss.
3. Happy and You Know It by Laura Hankin: 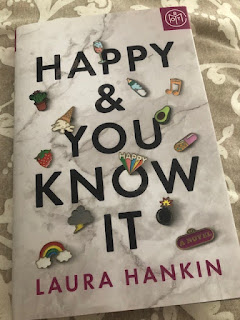 This was my May Book of the Month club pick. This one is sort of Sex and the City meets Workin Moms meets The Nanny Diaries. So....I liked it! This is about a group of wealthy Manhattan moms and the young woman they hire to lead a music class with their toddlers. This one deals with marriage, class, race, friendship, drugs, motherhood, and the relationship between boss and employee. This one is a bit outrageous at times, but overall, it held my interest and the commentary in this one is much more thoughtful than it would seem on the surface. This one is definitely rated R!
4. The Honey Don't List by Christina Lauren: 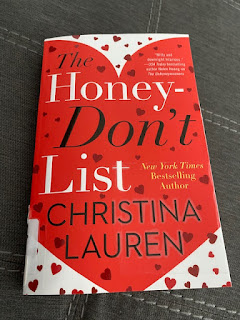 This one was just so meh. It was cute but totally predictable and as far as chick lit goes, there are much better options out there. This is a short little book about a couple who are basically like Chip and Joanna Gaines. Their home goods empire is about to fall apart and must be saved by their assistants....who fall in love with each other. This book wasn't awful but very Hallmark movie-ish.
5. Ghoster by Jason Arnopp: 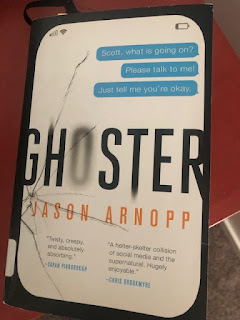 Guys. I can only hope this is the strangest book I'll read this year. I can't remember how I found out about this one, but it's about a woman who's about to move in with her boyfriend but he suddenly goes missing and "ghosts" her. But then actual ghosts come onto the scene. Yeah. The ending of this one gets super sci-fi and while I was expecting a domestic thriller, it turned into something like Stranger Things. The over arching message here is that social media/device addiction can literally kill you, but it was seriously so cheesy it felt like a Goosebumps book.
6. All The Missing Girls by Megan Miranda: 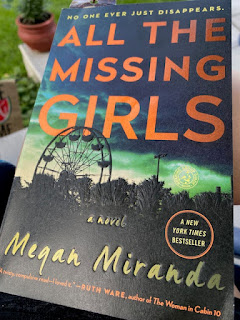 I had high hopes for this one. Girls going missing? A small town loaded with secrets? Love traingles? Shady pasts? Sign me up! So why did I hate this book? Because I had NO CLUE what was going on! At page 50, I texted my sister, "When will this start to make sense?" At page 150, I went on Amazon to read the reviews. Until the very last page, I'm not sure I could tell you exactly the plot of this one. Maybe I read this too tired late at night, or maybe my comprehension skills needs some work, but I hate it when a book makes no sense and is really confusing. A huge part of the problem was that this book is told BACKWARDS. Like after each chapter, it'll say, "The Day Before..." so while I think that was meant to make it twisty and allows the reader to try and piece clues together, it just threw me for a loop. For those reasons, I'm out.
I have a stack of books ready to go for the rest of the summer! Bring on the books!
Savor Your Sparkle,
Leslie
Here are my 2020 Books so far with stars by my faves---1. The Confession Club by Elizabeth Berg2. The Wives by Tarryn Fisher3. *Seven Days of Us by Francesca Hornak4. Over the Top by Jonathan VanNess5. *Teach Like Finland by Timothy D. Walker6. The Homecoming of Samuel Lake by Jenny Wingfield7. *Harry Potter and the Sorcerer's Stone by J.K. Rowling8. Harry Potter and the Chamber of Secrets by J.K. Rowling9. *Harry Potter and the Prisoner of Azkaban by J.K. Rowling10. Finding Chika by Mitch Albom11. The Sundown Motel by Simone St. James12. *Beneath a Scarlet Sky by Mark Sullivan13. The Dead Girls Club by Damien Angelica Walters14. *Such a Fun Age by Kiley Reid15. *True Crime Addict by James Renner16. The Ingredients of Us by Jennifer Gold17. You Are Not Alone by Greer Hendricks and Sarah Pekkanen18. Rushing Woman's Syndrome by Libby Weaver
19. Harry Potter and The Goblet of Fire by J.K. Rowling20. The Two Lives of Lydia Bird by Josie Silver21. *On the Bright Side by Melanie Shankle22. *One of Us is Lying by Karen M. McManus23. The First Time by Colton Underwood24. Red, White and Royal Blue by Casey McQuiston
25. *Harry Potter and The Order of the Phoenix by JK Rowling
26. *The Paris Hours by Alex George
27. The St. Francis Society for Wayward Pets by Annie England Noblin
28. *The Chestnut Man by Soren Sveistrup
29. Girl Logic by Iliza Schlsinger
30. *Harry Potter and the Half Bloos Prince by JK Rowling
31. *Look Alive Out There by Sloane Crossley
32. *Happy and You Know It by Laura Hankin
33. The Honey Don't List by Christina Lauren
34. Ghoster by Jason Arnopp
35. All the Missing Girls by Megan Miranda
Posted by This Sunday Kinda Love at 7:12 AM

Email ThisBlogThis!Share to TwitterShare to FacebookShare to Pinterest
Labels: 2020 reads