Hank at 2 and a Half

My sweet Hank officially turns 2 and a half in June. He is growing so quickly and it blows my mind that he's closer to 3 than 2! I decided to do this post for memory's sake. To see other Hank updates, click HERE 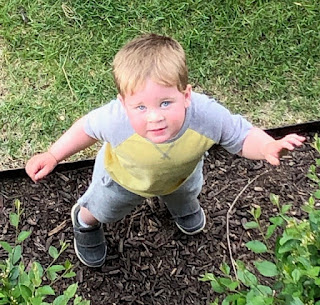 Hank Plays: Hank enjoys riding around in his Paw Patrol car, anything with balls (he told me last week when I tossed him a football, "Mom, let's stick with soccer. We don't have football helmets and we need 'em!"), coloring, Kinetic Sand, puzzles, and play doh. Every night we ask Hank what his favorite part of the day was and he always says, "OUTSIDE!" He loves walks, playing with his water table, digging in the dirt, but mostly his bubble mower. We can't go check the mail without Hank insisting on "I mow" as we walk. That little bubble mower has gone alllll over the neighborhood. 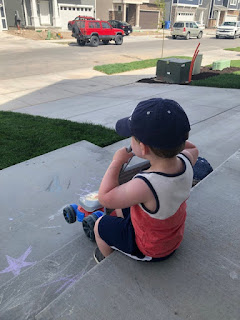 Hank Eats: Hank's appetite ebbs and flows. Somedays he doesn't eat much and other days I can't keep the snacks coming fast enough. Hank still has a sippy cup of milk in the morning and at night. For breakfast he likes muffins, waffles with peanut butter, french toast sticks, dry cereal, bananas, applesauce. Lunches and dinners are usually: mac and cheese, chicken nuggets, pb and j, noodle bowls from Costco, frozen pizza, grilled cheese. He will sometimes have what we're having (or a variation of it). Special treats he likes are popsicles, M and M's, sugar cookies. Snacks are usually veggie straws, pouches, peanut butter crackers, graham crackers, or a Danimals smoothie. He used to love cheese but now he's not so into it. He loves "dipping" anything and he tried hummus recently and likes it. He hates pickles and onions and tells me so anytime I'm cooking. Haha. 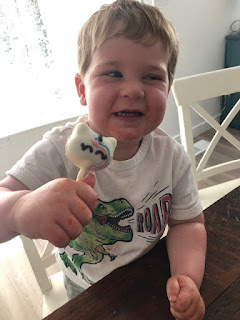 Hank Sleeps: Hank has been getting up earlier lately. He's usually up between 6-7:30 and goes to bed most nights between 7:30-8:30. Hank takes a nap every afternoon from about 1-3 ish. He varies between 1 hour up to 3 hours. When I was online teaching, this was my power up time, to get as much done as I could! After lunch, he plays on ABC Mouse for about 15 minutes then he knows it's time to go to sleep. He'll even tell me, "It's nap time now!" 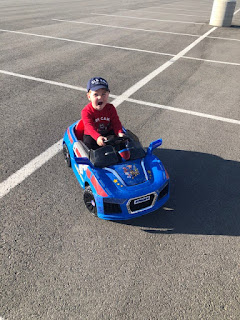 Hank Loves:
-Talking---I drove about 25 minutes to a park last week with just me and him and he talked the. entire. drive. there. Haha.
-Rice
-Fed Ex trucks. I ordered him a new baseball hat recently and saw a FedEx truck and told him his hat might be on board. Now everytime he sees a FedEx truck (or plane even!) he shouts, "FEDDDDD EXXXXXX!"
-His blue bunny from Arctic Circle he named Zoe. He can never sleep without "My Zoe."
-Blues Clues/Daniel Tiger/Paw Patrol
-Being "cozy" (basically anytime he has a blanket on him)
-Saying, "I do it myself." #toddlerhood
-Admiring the flowers he planted with dad and helping to water them
-The garbage man
-dinosaurs
-dance parties
-baking with mom
-doing his "exercises" (he cracks us up by doing squats, lunges, jumping jacks and tells us he is working out his muscles)
-Happy Meals
-Aunt Libby/Uncle Joe/Uncle Matt/Uncle Brian
-His Grandparents
-School! Hank stopped going to school mid-March (dumb covid) and he will be home with us this summer. He misses his teachers and friends but we try and talk about school a lot to keep it fresh so it's not totally foreign when he returns.
-Typing furiously on an old computer and informing us he's writing about "hammerhead sharks." 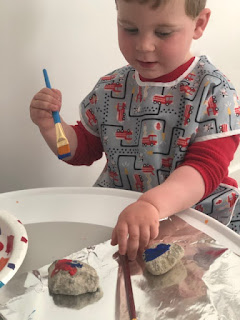 We've dipped our toes into the potty training waters but we're not all the way there yet. Hank sleeps in diapers and usually wears underwear during the day when we're home. He will almost always go when we put him on the potty, but rarely does he express the need to go on his own. I'm not stressing about it or pushing it. When he does go, he gets a Swedish fish and yells, "I did it! Go Hank!" 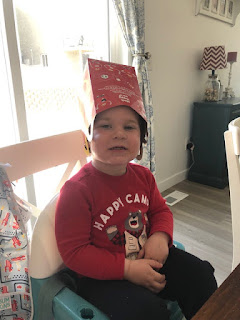 This little man is so precious to us. It has been an unexpected blessing during this time to have more time at home to spend with our wonderful boy. He is a ray of sunshine and I'm so thankful I get to be his momma. 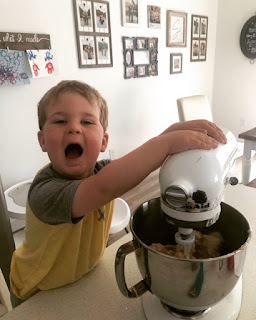 Savor Your Sparkle,
Leslie
Posted by This Sunday Kinda Love at 7:09 AM

Email ThisBlogThis!Share to TwitterShare to FacebookShare to Pinterest
Labels: Hank