It's my monthly reads post! I've got 6 books for you this month. If I've gotta stay home, I sure am thankful to be with my dudes and some good books!! Ok, first up, an audio book.... 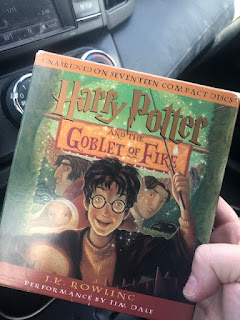 1. Harry Potter and The Goblet of Fire by JK Rowling: This was a great listen but I felt like this book would NEVER END because I started it at the end of February (it's 17 discs long), and then the world became a dumpster fire and I stopped driving to and from work (and on errands, and to the gym, and to every single place ever) and instead of 4-5 discs a week, I was lucky if I was in the car an hour a week this past month or so. SOOOO.....all that to say, I finally took the long way home enough times to finish listening to this one (I cheated a watched the movie a few weeks ago) and liked it! This one was not nearly as good to me as The Prisoner of Azkaban (book 3), but I really liked the way the characters are changing and how the story is evolving. I feel like it's reaching its peak and I cannot wait to read all about Harry's last 3 years at Hogwarts. I'm so glad I made the Harry Potter series my New Years resolution. 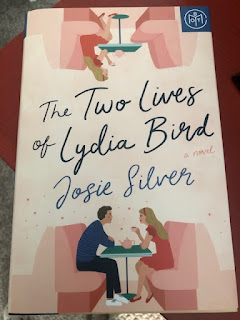 2. The Two Lives of Lydia Bird by Josie Silver: This was my March Book of the Month Club pick. This is about a young woman whose fiancee dies unexpectedly. She is working on building her new normal with her fiancee's quirky best friend by her side, when she experiences something mystical: an alternate reality in her dreams where her life is completely normal. She goes back and forth in both worlds. This book had a year long time line and I really enjoyed this story. It is sad but charming if that makes sense. This one will have you reading until the very end to see which "life" Lydia will choose. 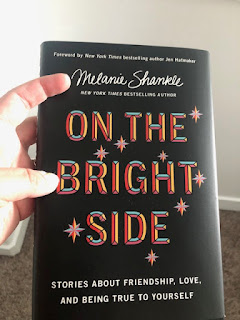 3. On The Bright Side by Melanie Shankle: I have read every one of Melanie Shankle's books and I had pre-ordered this one on Amazon. Well, this was one of 3 of my Amazon items this month that has been "lost in transit." So....I was able to get a refund and try out Barnes and Noble curbside pick up for this one and One of Us is Lying. This book was just as delightful as Melanie's other books and could a book called "On the Bright Side" be any more relevant for these days we are living in now?? Melanie is real, and raw, and hilarious. In between her musings on motherhood (I took a picture of my favorite quote from the book, "The truth is, it's never been a parent's job to make childhood magical. It already is magical. They get summers off and someone makes dinner for them every night. That's magical. As adults, that's what we refer to as vacation") and haircolor, she drops some beautiful words of truth. She sums up her look on the bright side with writing, "God is good. God is ever present. God is sovereign and full of grace, mercy and love for us." This book really is a bright spot. 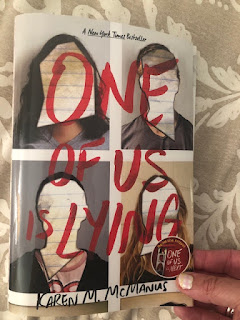 4. One of Us is Lying by Karen M. McManus: This is a YA book that I had heard great things about. I really enjoyed this twisty, fast paced book. This is about a death at a high school and the 4 teens suspected of committing the crime. It's told in back in forth style and really did have me guessing. If you liked the show Pretty Little Liars, this book is right up your alley. 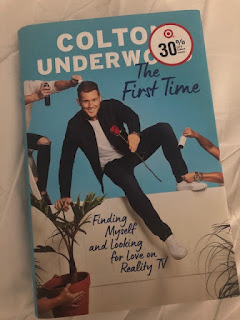 5. The First Time by Colton Underwood: Could this be the worst book I've read all year? But, Leslie, it's only April, how can you make that call so soon? If you read it, you know. Guyyyyys, I love anything involving Bachelor Nation and am a diehard fan of the show. I really liked Colton and despite being teased with a fence jump for weeks on end, I enjoyed his season. But this book is garbage. Here's the thing: I think Colton is a nice guy. He means well and I'm happy he found love with Cassie, but the dude is just not super likable. He basically groomed himself since high school for a role like this and he is in love with himself and his new found celebrity. It's just a really odd book and I wish someone close to him would have let him know "author" should maybe not appear on his resume. But did this entertain me in the days of Covid? Yep, sure did. 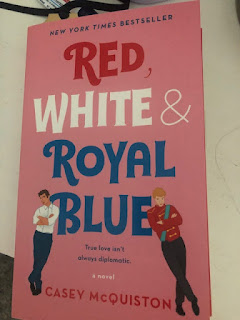 6. Red, White, and Royal Blue by Casey McQuiston: This was a book borrowed from my sister. It took me a while to get into it, and half way through I declared it a "meh" book, but by the end, it really grew on me. I couldn't put it down there in the last bit and overall I ended up really liking it. This is about a world in 2020 where we have a female president and her gay snarky son ends up falling in love with the Prince of England! It's a fun premise and even though the main character Alex, the first son, wasn't my fave at first, he really grew on me. This one is definitely rated R and is pretty pearl clutching (in the words of my sister). This is a great beach read (or, who are we kidding? No one is on vacation. This is a great escape from covid craziness in your house).

That's a wrap on April reads! I am so missing the library and have gotten creative with borrowing and sharing books and buying some too. My library card is burning a hole in my pocket! What wonderful reads have you tackled while in quarantine?


Here are all my reads of 2020 so far with stars by my faves.....
1. The Confession Club by Elizabeth Berg
2. The Wives by Tarryn Fisher
3. *Seven Days of Us by Francesca Hornak
4. Over the Top by Jonathan VanNess
5. *Teach Like Finland by Timothy D. Walker
6. The Homecoming of Samuel Lake by Jenny Wingfield
7. *Harry Potter and the Sorcerer's Stone by J.K. Rowling
8. Harry Potter and the Chamber of Secrets by J.K. Rowling
9. *Harry Potter and the Prisoner of Azkaban by J.K. Rowling
10. Finding Chika by Mitch Albom
11. The Sundown Motel by Simone St. James
12. *Beneath a Scarlet Sky by Mark Sullivan
13. The Dead Girls Club by Damien Angelica Walters
14. *Such a Fun Age by Kiley Reid
15. *True Crime Addict by James Renner
16. The Ingredients of Us by Jennifer Gold
17. You Are Not Alone by Greer Hendricks and Sarah Pekkanen
18. Rushing Woman's Syndrome by Libby Weaver
19. Harry Potter and The Goblet of Fire by J.K. Rowling
20. The Two Lives of Lydia Bird by Josie Silver
21. *On the Bright Side by Melanie Shankle
22. *One of Us is Lying by Karen M. McManus
23. The First Time by Colton Underwood
24. Red, White and Royal Blue by Casey McQuiston
Posted by This Sunday Kinda Love at 7:23 PM

Email ThisBlogThis!Share to TwitterShare to FacebookShare to Pinterest
Labels: 2020 reads