Guys, I did it. I finished reading Ron Chernow's Hamilton. I started this book last spring and read bits and pieces of it every once in a while between other books and finally finished it this week. It's 818 pages, but that includes notes and reference pages. This is the book that the musical is based on. Once I saw the show, I just knew I had to read this book cover to cover myself. I have a lot of thoughts but basically: it was torturous to read, each page took forever, it was so crazy long and chocked full of so much detail, sometimes reading it felt like homework but......I loved it and maybe want to even read it again. I know, I know. In between listening to the soundtrack and dreaming of a trip to go see the show again, I have some thoughts on this epic read. I will present them (much to wordy Hamilton's likely chagrin) as a list. 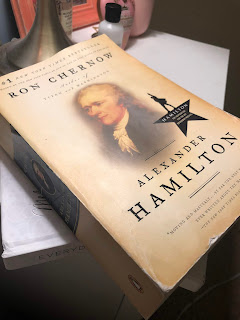 -The study of history matters now more than ever. Throughout this book I kept thinking situations, conversations, actions within the pages could be overlayed with today's political climate and one would hardly know the difference. We aren't getting it right now (but we're trying) and they weren't getting it right then (but they were trying), and the lessons from the past are essential to guide us into a brighter future.

-Lin Manuel-Miranda is a genius. Plain and simple. There are actual lines from the book that appear as lyrics in the songs. It's all woven together masterfully.

-The beginning of the book (which I read way back in the summer, sheesh) is interesting as it follows Hamilton's upbringing and journey to America, but I actually liked the last bit of the book the best. When the "Hamiltons Move Uptown" (suuuch a great song), Hamilton becomes more introspective, religious, calm, and more of a family man than ever before. He settles down, cools off and even though he died while still relatively young, his later years were spent in quiet (well, quiet for Hamilton) reflection.

-While Washington is presented as noble and a true leader, the portrayals of Jefferson and John Adams make them out to be petty, villainous, and undeserving of the accolades history has provided them with.

-I'm not sure Hamilton ever had an affair with his sister in law Angelica (and the book doesn't claim this either), but they had a unique, special closeness that was fascinating to read about.

-Hamilton was one of the few founding fathers who was really an abolitionist. He "tolerated" slavery, but never to the extent of Jefferson and other leaders at the time. He struggled to side with the financial interests of the agrarian South because he knew on whose backs it was built and he felt this was immoral (because it was).

-Immigrants. They get the job done.

-Eliza is the true hero of this tale. Not only does she go on after Hamilton's death to start an orphanage and care for society's neediest, she rode the waves of Hamilton's tumultuous career (and womanizing) with grace and poise. She is, as Hamilton (and Lin-Manuel) say, "The best of wives and the best of women."

-Burr's jealousy of Hamilton is perfectly captured in the song "Wait For It." He could never quite touch Hamilton's finesse and it drove him crazy.

-The notes and references section of this book is HUGE. I would love an insider's look at how it was all put together. It's a stunning biography as well as a comprehensive look at history during this time.

I think the reason why Hamilton's story is so fascinating is because in him we have an example of a self-made American hero. He is not always likable (The Reynolds Pamphlet, anyone?), he is arrogant, long winded, selfish, and single minded. BUT....he did great things for this country and his legacy lives on in so many aspects of our day to day life. He was a poor immigrant and rose to the top by being "non-stop." His success occurs simultaneously with deep depression and personal tragedy, but through it all, Hamilton emerges as the protagonist who is, oddly, relatable and charming. You could say I'm a Hamilton fan girl. I'll pick up some easier to read, lighter books now, but this book will always have a prized place on my bookshelf. 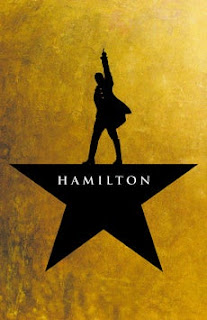 Savor Your Sparkle,
Leslie
Posted by This Sunday Kinda Love at 6:47 PM

Email ThisBlogThis!Share to TwitterShare to FacebookShare to Pinterest
Labels: books