It's been a while since I've done a Hank post, so here we go!
Sometimes I catch glimpses of Hank and I see a BOY---not a baby, not a toddler, but a little boy.  Each phase is precious and perfect in its own way but toddlerhood is a real kick. People ask me all the time how old Hank is and instead of getting into month math (counting is hard), I always say, "He'll be 2 in December." TWO YEARS OLD. It has sped by at warp speed! 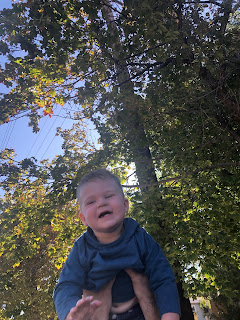 Hank Eats: Hank is a big eater. I always ask his daycare teachers how he ate at lunch and snack and they always laugh and see, "He loves food." He gets that honestly. Hank has a sippy cup of milk when he wakes up and before bed. I recently switched him to 2% milk and am so glad because whole milk in my cereal was probably not the healthiest choice. Hank enjoys: raisin bread toast, nutrigrain bars, bananas ("NANA" is a often heard phrase around here with mad gestures toward the fruit bowl), applesauce, eggo waffles, scrambled eggs, macaroni and cheese, chicken nuggets, Goldfish (especially the pretzel ones) green beans, rice, yogurt, pinto beans, and quesdadillas. He's not a huge meat eater (aside from nugget form). For lunch I usually pack him an Uncrustable, a cheese square (tillamook ones from Costco are our fave), a fruit cup/vegetable and some sort of cracker or bar. It is freeing to be able to go out to eat and not pack special food for him! 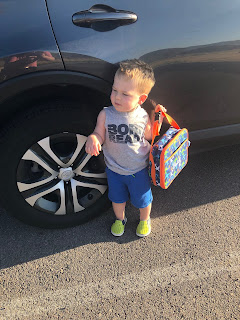 Sleeps: Hank likes to sleep in and on school days I have to wake him up and he is mad about it. Hank wakes up anytime between 7 and 9. He goes to bed anytime between 7 and 8, but it's often around 8:30 on the weekends. He takes one nap a day now, after lunch. When he's home he will usually nap for about 2-3 hours but at school, it's around an hour (too much fun to be had I suppose). He sleeps in his crib with his lullabies on and lately he's been requesting an "amminalll" to sleep with as well (animal). 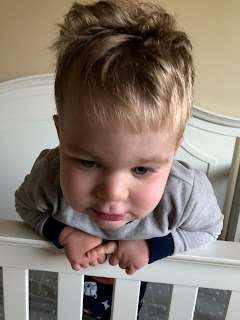 Play: Hank LOVES to play outside. The only "attitude" we've gotten from him so far involves when he doesn't want to come inside. He loves to walk to get the mail or to the park. He makes a beeline for his bubble mower and golf set anytime he's in the front yard. Balls and bubbles remain tried and true favorites. Hank loves play doh, looking at books, blocks, and we've recently begun exploring with coloring. 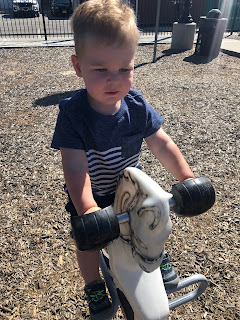 Wears: Hank's 2T clothes are getting snug so anything I buy now, I go for a 3T. I bought him a coat recently and went with a 4T on that. So many precious baby outfits and onesies are no longer an option for us...boooo! Tee shirts and athletic shorts and sweats are pretty much his look, but I do love him in some toddler jeans and a polo too! I still love Carters, Old Navy, Walmart, and Target. He wears size 6 shoes and sometimes it's my most heart pumping cardio of the day wrestling them on him. 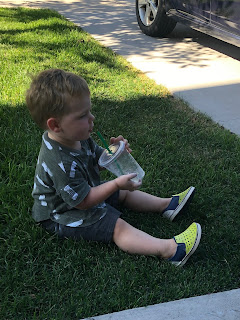 Hank Loves:
-FAMILY! Hank adores his grandparents and Aunt Libby and Uncle Matt.
-"Nigh Nigh"---when Hank is tired and done, he will let you know, and request his crib
-Paw Patrol---Hank loves Paw Patrol and anytime we see a Paw Patrol anything he loses his mind and says "PaaaPaaaa." And in case you were wondering, you can buy ANYTHING with one of those dogs stamped on it (I type while eating a Paw Patrol shaped graham cookie). 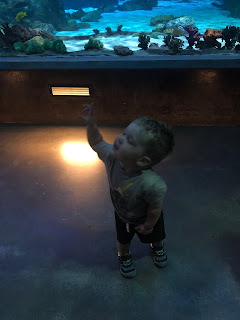 -Bath time: Hank has taken to "swimming" in the bath and loves splashing around and playing.
-Coco. Guys, I am not exaggetating when I say I must have seen this movie 200 times. Hank requests it all the time and lately when we've been seeing anything skeleton or Day of the Dead like at Target or neighborhood decorations he points and says "COCO." It's a really sweet movie and I know he enjoys all the bright colors.
-Gladitator: Ok, so Hank and AJ love rough housing, wrestling, just general "wildness" after dinner. It makes me laugh and sometimes I join in. We have 2 long pillows on our couch, one says XOXO and the other says "Our Nest," so shabby chic cuteness but somehow these long pillows have morphed into gladiator style battering rams and Hank LOVES rough housing with them.
-Animals: Hank loves finding snails and ants. He loves the aquarium!
We adore our handsome Hank and we are joyful and honored to be his parents! 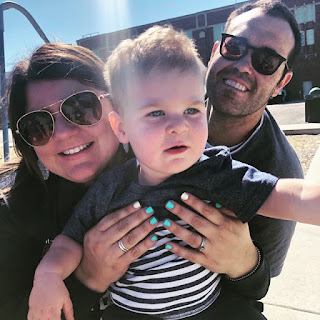 Savor Your Sparkle,
Leslie
Posted by This Sunday Kinda Love at 6:45 PM