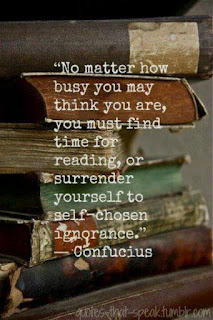 It's time for a monthly reads post! I read 4 books this month! Well, more like 4 and 1/1000th. Haha. I've had the book Hamilton since last summer. It's no secret I adore the show Hamilton and listen to the music on a near daily basis. I figured being a fan, I should make like Lin Manuel and read the bible that started it all. But guys. This thing is a beast. It's interesting, no doubt. But it's not exactly "read in the grass on a sunny day" or "read in a Lush bath bomb scented bath" type of thing. And this, coming from a history major and from someone who already basically knows the whole story. I'm about 90 pages in and so I won't dare count it as a monthly read until it's done, but I'll be slowly chipping away at this saga for the next few months (years?).

Ok....time for the books I DID finish this month! 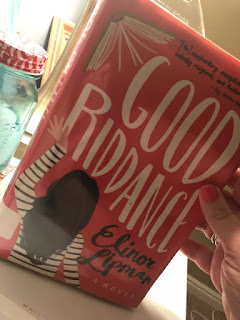 Good Riddance by Eleanor Lipman: This was a super fun read. It's about a woman who inherits her mother's old yearbook (her mother was the teacher) and the mishaps and adventures that she discovers while trying to figure out the yearbook's importance. Along the way, she develops a "frenemy" relationship with a wacky neighbor, an exciting and unexpected romance, and family relationships that shift and grow. This book is an offbeat version of classic chick lit and I really enjoyed it. This would be a great one to toss in your pool bag this summer. 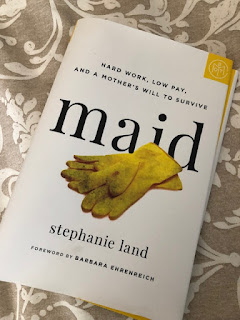 Maid by Stephanie Land: I read a huge chunk of this book while on jury duty. Ok, I have some thoughts on this one. This is a memoir of a single mom and her struggle to make ends meet and navigate the welfare system. I love how this book really puts you in her shoes and it's a great picture of the hardships many people have to endure. It puts the spotlight on a broken system. However, I wasn't a huge fan of the main character and at times, it felt like one sad let down after another. It's important to know this stuff, but the book was pretty slow I felt and just ended up leaving me feeling blah. There's a ton of descriptions of the nastiness of the homes she's cleaning which yes, gives you perspective on how tough her job is, but just no thanks. I liked this one, didn't love it. 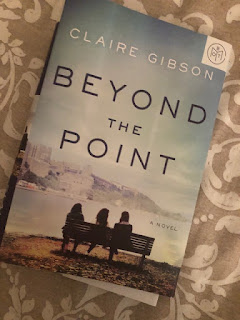 Beyond the Point by Claire Gibson: This was my April Book of the Month club pick and I really enjoyed it! I love a story that spans years (think Firefly Lane by Kristen Hannah), and this one follows the journey of 3 young woman as high schoolers, students at West Point, and into their lives after they graduate. It's about modern womanhood, the military, relationships, war, loss, and through it all, there's this awesome powerful story of friendship. If you liked the show Army Wives like I did (vintage Sterling K. Brown alert!), you will really enjoy this one. 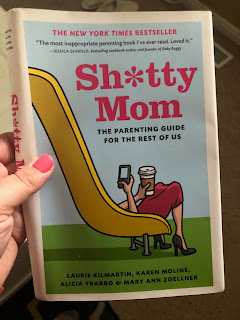 Sh*tty Mom by Laurie Kilmartin, Karen Moline, Alicia Ybarbo, MaryAnn Zoellner: This is a teeny book that showed up on my Pinterest suggestions and I picked up used on Amazon for a buck! This book is funny....in an offbeat, Chelsea Handler sort of way. It's a brutally honest look at motherhood that did have me chuckling a bit. It's written like a guidebook, but in a very cheeky way. This might be a fun gift for a friend but I think there are better books about motherhood that have a bit more sweet and a little less snark. HOWEVER, there was part about names and they said regarding Hank, "Just say no," so I'm forced to hate this book forever and ever. No wonder it was a dollar. #dontmesswithhank

2019 Books! (I put * by my most fave ones!)
1. An Anonymous Girl by Greer Hendricks and Sarah Pekkanen
2. The Curious Charms of Arthur Pepper by Phaedra Patrick
3. The Last Original Wife by Dorothea Benton Frank
4. *Nine Perfect Strangers by Liane Moriarty
5. Happy Teachers Change The World by Thich Nhat Hanh and Katherine Weare
6. The Day I Went Missing by Jennifer Miller
7. *Glow Kids by Kardaras Nicholas
8. Final Girls by Riley Sager
9. *Becoming by Michelle Obama
10. As Long As We Both Shall Live by Joann Chaney
11. *The Family Next Door by Sally Hepworth
12. If You Only Knew by Jamie Ivey
13. *The Home for Unwanted Girls by Joanna Goodman
14. Adequate Yearly Progress by Roxanne Elden
15. *Regrets Only by Erin Duffy
16. *Girls in the Garden by Lisa Jewell
17. I Owe You One by Sophie Kinsella
18. *The Tattooist of Auschwitz by Heather Morris
19. *Give Me Your Hand by Megan Abbott
20. When Did I Get Like This? by Amy Wilson
21. *Good Riddance by Elinor Lipman
22. Maid by Stephanie Land
23. Beyond the Point by Claire Gibson
24. Sh*tty Mom by Laurie Kilmartin, Karen Moline, Alicia Ybarbo, MaryAnn Zoellner