Hi Friends/Readers!
I am so excited to share my November reads with you today! I played catch up with some Book of the Month picks, got my hands on the new Jodi Piccoult and read a great faith-based book too. 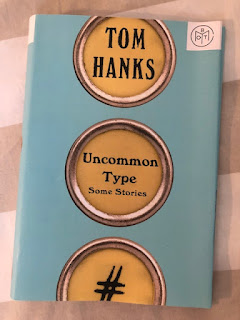 1. The Uncommon Type by Tom Hanks: Yes, that Tom Hanks. Guys, I hated this book. Like it was hard to plow through it. I haven't read a book like that in a long time. Here's the thing, this is a book of short stories, which normally I love (David Sedaris, Sloane Crossley etc) but these were just boring to me. I was telling AJ about it and he asked what all the stories have in common or if there is a common thread (one of the most endearing parts about short story collections) and you know what I said, "Yes, all the stories have something to do with TYPEWRITERS." I'm not kidding, it's the truth. I didn't realize how crazy that was until I said it out loud. Maybe it's too literary for my taste and I'm missing something, but I don't think so. Tom, I love ya, but I was not a fan of this collection. 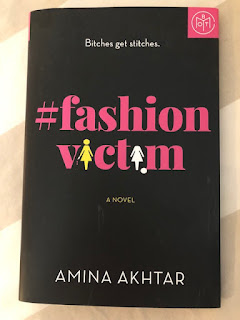 2. Fashion Victim by Amina Akhtar: I chose this book as a fun, spooky Halloween read but I didn't get around to it until November. Oops. I liked this book in the same way I liked Pretty Little Liars: Creepy, engaging, but also found it sort of outrageous and ridiculous. This book is about a fashion magazine and a creepy employee who is "dying" to fit in....at whatever cost. This book is very violent but it made me want to keep reading. It's told from the villain's point of view so it's interesting. It definitely has Young Adult novel vibes, but overall, it was worth the read. 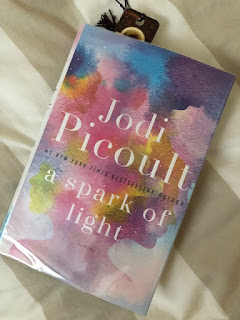 3. A Spark of Light by Jodi Picoult: I've been waiting for this book for months! I am a major Picoult fan and this one did not disappoint. Now, it wasn't my favorite of her books (Nineteen Minutes and Leaving Time are my faves), but it features her beautiful, poignant storytelling and her masterful ability to get into the head of every single character. This book is about a shooting at an abortion clinic and it's told hour by hour backwards with vignettes about how each character managed to find themselves at the clinic that day. A warning---there are graphic descriptions of shooting/hostage situation that I found disturbing but there is also a tough scene about an abortion procedure....at times it was hard to read. BUT...I would still overwhelmingly recommend this book. It's one that begs to be discussed and really opens the conversation about women's rights, politics, faith, freedom, class, sex, and ultimately, how women can be each other's allies. A heavy one, but a good one. 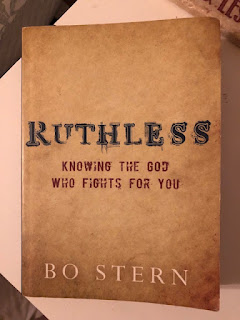 4. Ruthless by Bo Stern: My brother in law, Matt, gave me this book written by a pastor at the church he attended in Bend. This was a really great book about, as the cover puts it, knowing "The God who fights for you." This book is well organized and each chapter finishes the sentence, "The God who fights for you______." This book used scripture passages and bible stories (Stern previously wrote a book all about discovering God's character through the battles in the Bible and that theme is woven throughout this book too) to share essential truths about who God is and what that means for our lives. One of the quotes from the book I loved so much that I took a picture and wrote it in my journal: "We have mistakenly recast the idea of God's grace as something that eliminates sin rather than what it really is: the thing that activates forgiveness. Grace positions us within reach of God's mercy; it does not remove our desperate need for it." Truth bomb right there. This is a great little read if you're looking for a faith-based read this season. 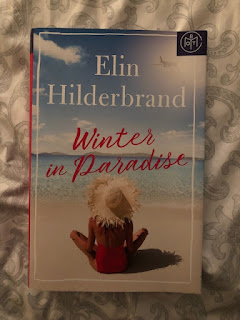 5. Winter in Paradise by Elin Hilderbrand: This was such a fun read! I've read a few of Hilderbrand's books before, and they are a no-fail/good plot line/chick lit choice. This is the start of a series (the other ones are due out in the next few years, so no pressure to commit to a whole new series now) about a family shaken by the death of their patriarch, their unexpected travels to St. John's and the characters, experiences, secrets, and of course romance that meets them there. This was one I read late into the night because it has everything I like in a novel. Now....is it an award winning, incredible, recommend repeatedly, so dang good book? No. But it's fun. Perfect hot cocoa companion read.

Whew! Only one month left of 2018 left to read! Ahh! Here are my 2018 reads....hoping to get in at least a few more this year. I put stars by my very favorites. I was thinking about putting together a Top 10 list next month....it'll be a hard choice!

*1. Behind Closed Doors by B.A. Paris


2. When We Were Worthy by Marybeth Whalen
*3. Confessions of a Domestic Failure by Bunmi Laditan
4. Of Mess and Moxie by Jen Hatmaker
*5. One True Loves by Taylor Jenkins Reid
6. Glitter and Glue by Kelly Corrigan
*7. The Third Wife by Lisa Jewell
8. Parent Hacks by Asha Dornfest
9. The Rosie Project by Graeme Simsion
10. The Royal We by Heather Cocks and Jessica Morgan
*11. Sisters First by Jenna Bush Hagar and Barbara Pierce Bush
12. Look Again by Lisa Scottoline
13. Anxious for Nothing by Max Lucado
14. The Simplicity of Cider by Amy E. Reichert
15. The Bookshop on the Corner by Jenny Colgan
*16. The Perfect Nanny by Leila Slimani
*17. Sugar by Kimberly Stuart
18. Achtung Baby by Sara Zaske
*19. The Wife Between Us by Greer Hendricks and Sara Pekkanen
20. Bachelor Nation by Amy Kaufman
*21. Little Fires Everywhere by Celeste Ng
*22. The Last Mrs. Parrish by Liv Constantine
23. Mindless Eating by Brad Wansick
24. Now That You Mention It by Kristan Higgins
25. Our Father by Pope Francis
26. Not That I Could Tell by Jessica Strawser
*27. How to Walk Away by Katherine Center
28. Girl Wash Your Face by Rachel Hollis
29. You Think It, I'll Say It by Curtis Sittenfled
30. This is Me by Chrissy Metz
31. Let's Pretend This Never Happened by Jenny Lawson
32. The Book of Essie by Meghan Maclean Weir
*33. Calypso by David Sedaris
*34. We're Doing It Wrong by David Michael Slater
*35. Fitness Junkie by Lucy Sykes and Jo Piazza
36. The Better Mom by Ruth Schwenk
*37. Then She Was Gone by Lisa Jewell
38. The Energy Bus by Jon Gordon
39. A Wrinkle in Time by Madeleine L'Engle
40. There Are No Grown-ups by Pamela Druckerman
*41. Educated by Tara Westover
42. The Little Old Lady Who Broke All The Rules by Catharina Ingelman-Sundberg
*43. Eleanor Oliphant is Completely Fine by Gail Honeyman
44. The People We Hate At The Wedding by Grant Ginder
*45. I'll Be Gone in The Dark by Michelle McNamara
46. People I Want to Punch in The Throat by Jen Mann
47. Hello Sunshine by Laure Dave
*48. My Oxford Year by Julia Whelan
49. When Life Gives You Lululemons by Lauren Weisberger
50. From Scratch by Allen Salkin
51. Ghosted by Rosie Walsh
52. Heartland by Kimberly Stuart
53. All We Ever Wanted by Emily Giffin
*54. Baby Teeth by Zoje Stage
55. By The Book by Julia Sonneborn
56. The Great Alone by Kristin Hannah
57. Skinny Bitch by Rory Freedman and Kim Barnouin
58. The Other Woman by Sandie Jones
*59. The Year of Pleasures by Elizabeth Berg
60. Whiskey in a Teacup by Reese Witherspoon
61. The Dinner List by Rebecca Serle
*62. Good Luck With That by Kristan Higgins
63. An Uncommon Type by Tom Hanks
64. Fashion Victim by Amina Akhtar
*65. A Spark of Light by Jodi Picoult
66. Ruthless by Bo Stern
*67. Winter in Paradise by Elin Hilderbrand

Posted by This Sunday Kinda Love at 5:41 AM