Hi Guys! Happy Friday! I have two delicious things to share with you today. One is a dinner recipe and the other is a "healthy" version of a blondie.

I have mentioned before how I've really gotten into sheet pan dinners. I love them because they are easy peasy and once you pop them in the oven that's really it. I have made a few different versions but thought I'd share with you the one we had the other night. The awesome thing about these suppers is the versatility. I personally like red pepper, mushroom, and broccoli but do you think I had any of these ingredients on hand this week and do you think I wanted to go to the grocery store at 7:00? That would be a no on both counts. But whatevs, this dinner is your creation, mix it up as you see fit! This really isn't a recipe so much as a "dinner idea" for you. 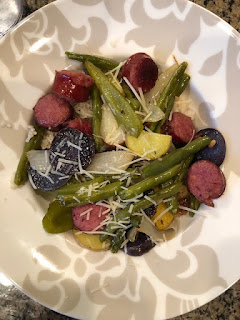 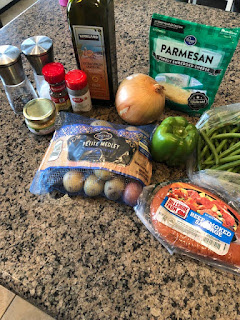 1. Rinse and trim your beans, preheat oven to 375.
2. Chop onion, sausage, potatoes and pepper into big chunks
3. Throw it all on a sheet pan (I use 2 pans so as not to overcrowd)
4. Mix olive oil and seasonings. Pour over veggies and toss to coat
5. Bake for about 40 minutes. Sprinkle on some parmesan and serve.

Sometimes we'll eat this as is and sometimes we'll add a grain. Tonight was frozen TJ's brown rice (love!). This has become a staple at our house. 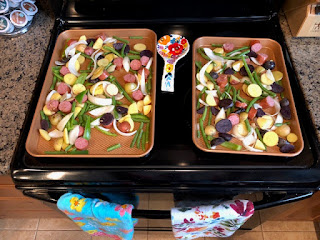 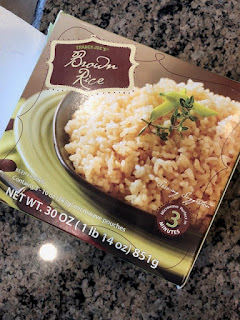 Now.....are you ready for this?? I came across this recipe on Pinterest which, as well know, can be the source of many a recipe fail. But these FLOUR AND SUGAR FREE Blondies were amazing. I will admit the smell while making them kind of grossed me out, but once they baked up and I had a slice with a big ol' glass of milk, I was sold. See, I was skeptical, though, because while chocolate chip blondies sound like a good idea I got sort of freaked out when I came across the mystery ingredient......are you ready?


It comes from a can.

CHICKPEAS! Yes, that's right, chickpeas are the base of this treat and it sounds weird and it IS weird, but give these guys a chance. Trust me. I didn't get a pic but they ended up looking like the picture on the recipe (hardly ever happens).
Here's the recipe for Flourless Chickpea Blondies from Ambitious Kitchen. Here are my modifications: I used almond butter, pure maple syrup, regular semi-sweet chips, and I also added an egg. I made it in the blender. Next time I'd use dark chocolate chunks. Two delish things for your Friday. Have a great weekend.

Posted by This Sunday Kinda Love at 7:32 AM