I can hardly believe my little man is 4 months old! I thought I'd do a little recap of "Hank Life" here on the blog because while this little corner of the internet is for random recipes I've made up, book recaps, and a whole load of our "life lately" it's also basically my son's baby book. No fancy scrapbook up in here, just a url. This might be boring for ya'll, but I wanted to document a picture of our life with our fun and adorable 4 month old. Here it goes... 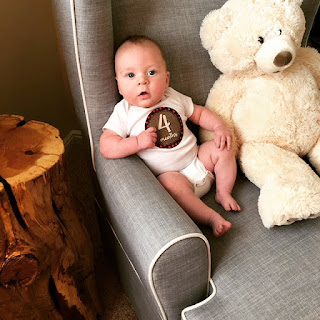 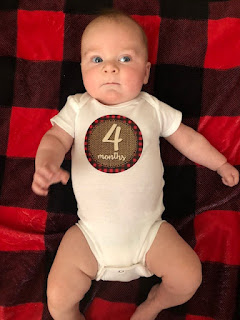 Hank is a delight. People ask me all the time if he's a "good baby" and he really truly is. He's very chill (unless he's hungry or super tired, then watch out) and he goes with the flow well. This month we really got in a good schedule "groove" but hey, I'm a teacher, I know these things can change and if need be, we can switch things up. Right now he wakes up around 7:00 (eliminating the 5 am feed and pumping session has been heavenly) and I usually change him and get him dressed in his jammies....he wears just a diaper and the Woombie swaddle to bed so jammies are just for evening and morning lounging. He can usually hold off his first bottle of the day until my mom arrives and I leave for work. Sometimes he's still sound asleep when I leave the house but that bums me out because I love our morning snuggles. Between 6-7 I usually rush around eating breakfast/getting ready and pray he stays asleep until I finish blow drying my hair or making the bed so I can get out the door on time. 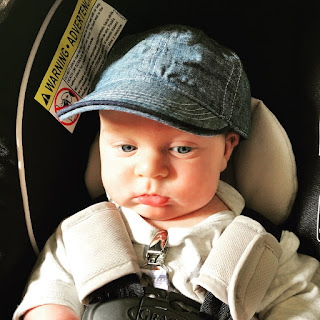 He sleeps in his crib (we started this officially on Easter) and usually goes to bed between 9 and 10:30. He sometimes goes straight to bed in his crib awake and nods off. Other times he's so beat that he's basically zonked out during his final diaper change and other times he is not digging the crib and he lays between us in our bed while we read and then we move him to his crib once he's fallen asleep (it usually doesn't take long). All the lights are out in his room and we turn on his lullaby sound machine and set it for an hour. 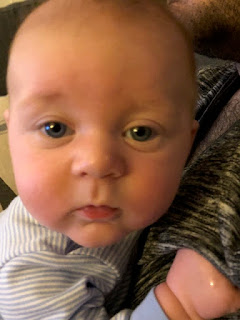 Hank loves to be part of the action. For a while he'd cry and cry while we ate dinner (we had him in the Mama Roo or on his playmat) and we then discovered he just wanted to be by us. He now "eats dinner" with us at the table with his bouncy seat on the table. I often put him in there on the kitchen counter while I make dinner too. He is happiest when all eyes are on him! 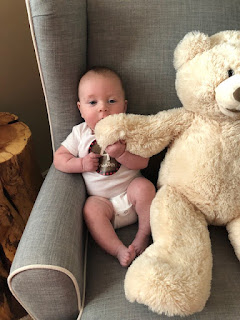 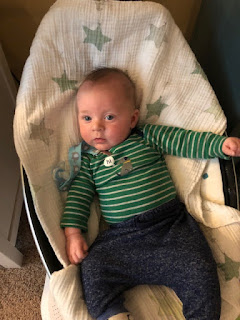 As far as naps are concerned, he's really mainly a cat napper. Very rarely does he sleep more than 90 minutes or so (his longest nap is in the morning, right after his first bottle). I figure since he sleeps through the night, I can't press my luck with naps. I want him nice and tired out by the time the evening comes around. We can always tell when it's bedtime or he's in need of sleep, that's usually when he gets fussy. The other day he was awake from 2 ish in the afternoon until 10. Yeah, he was mad. I can barely stay awake until 10 without a nap so I can only imagine how exhausted our little man must be! 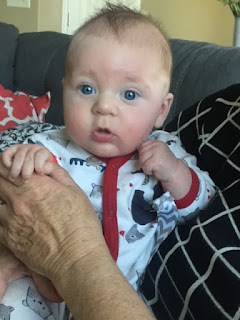 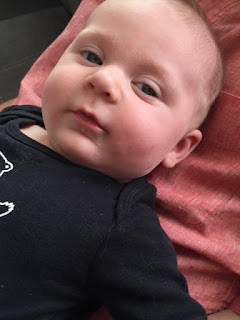 His eating has really picked up this month. He usually takes 6-8 oz a feeding and is on all formula now. I began the breastmilk pumping weaning process in early March and by the end of March I was no longer pumping at all. He doesn't eat as frantically as he did when he was a newborn (I think he's finally got the clue that yes, you will be fed whenever you're hungry. Chill dude). He does major burps after his feeds and it makes me laugh when he does a big formula belch in my face. He's always much more content after his burps! 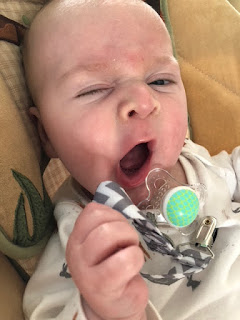 This month we busted out of the house (we were trying to keep him inside during his newborn days and flu season) and he went to church for the first time, to a wedding, Costco, coffee and lunch out, and tons of walks. It's quite the production taking him out (5 diapers, 2 outfit changes, 2 bottles, toys, pacifiers, wipes, bibs, boogie wipes, etc) but it's been nice going places as a family of 3 now. 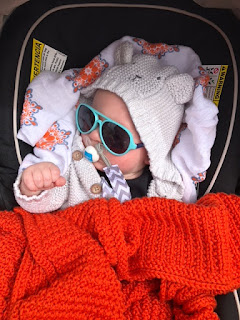 We bathe Hank every other night. We still use our plastic tub with the "sling" on the kitchen counter and probably won't put it in the actual bathtub until he's sitting up. He likes to chill out in his diaper for a bit after bath. Sometimes he wears his hooded towels or his sweet baby robe too. We no longer make the rookie mistake of going fully nude! 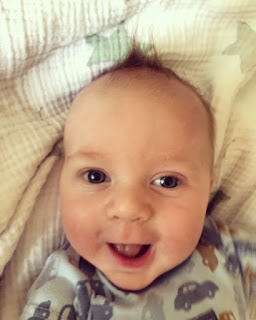 He loves: kicking on his piano mat, his Moose toy, MAM brand pacifiers, his cat car toy, looking at the fan, grabbing my hair, looking at lights, being fascinated by looking up at the ceiling when going up and down stairs, walks and sits outside, reading books in his rocking chair or bouncy seat, and going in his Baby Einstein "ball pit" play gym. He is an absolute joy and AJ and I both give thanks every single day that we get to be Hank Grayson's mom and dad. Happy 4 months, Hankster! We love love love love you! (one love for every month). 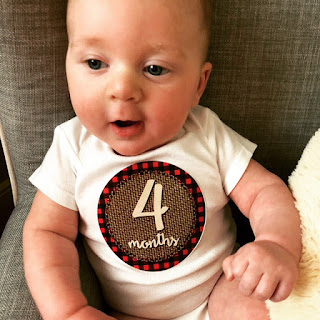 Posted by This Sunday Kinda Love at 6:26 PM