I've been a journaling fiend lately, and wanting to share some of my thoughts with you on the blog. Early November was one of the most difficult times I have had since Hadley passed. Physically I am all healed and feeling good, this month marks FIVE months since her birth and it would seem life has resumed back to business as usual. But yet it's so not usual, it's weird, new, and raw. But on the outside it looks the same. It even feels the same sometimes. But I am not the same, I am so radically different and changed (in some ways for better and some ways for worse).


Hadley's grave marker arrived and was installed last week. That hit me like a ton of bricks. It was physical evidence of the gaping hole in my heart. If you've lost someone close to you (I never had until Hadley), you know the feeling. The heart wrenching pain as your eyes spill out the tears caused from your broken spirit. Your hands feel and touch every inch of the stone and you think trying to "read" it like braille will somehow make it make sense. There's no sense to be made from it. I've struggled with teaching this year. It's hard to love other people's children when yours is in the ground. It's difficult to smile through gritted teeth when people tell you with an exaggerated eyeroll that "life's crazy, parenting is hard." Believe me, I know. But yet, I cling to the knowledge that "everyone is just doing their best." I'm in this weird space of refusal to be a victim (I flat out refuse. I am lucky and grateful and life doles out crap to everyone) but also being comfortable being like, yeah, this is totally unfair, unjust, and it sucks. It just really does. 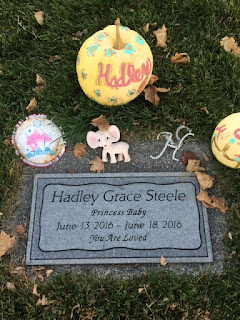 About 3 weeks after Hadley's death, AJ and I went back to church. Oh friends, it was so hard. One of the songs has a repeated verse that says, "You are good." In July when we sang that song that day in church, I couldn't. I grabbed AJ's hands as my eyes filled with tears. "I can't sing that because I don't believe that." I whispered to AJ. He nodded, he couldn't sing it either. I could not, would not believe that God was good. No good God would take my baby away. Sometimes it's hard to tell that AJ and I are progressing, that life is in fact moving forward. A few weeks ago in church we sang that song again. And this time I sang along. In fact, I bought the song on Itunes that same day and have probably listened to it no less than ten times a day since. It's such a paradox: life can kick you so hard and yet...and yet.....He is good. I don't understand why this happened to us. I will never understand. But one of the things that makes Him good is that I don't need to. He sees my pain, He hears my cry, and I like to think He wonders why I sob at her grave because He holds her now and while it SUCKS, we are trying to rest in that three word mantra: He is good. In spite of all the junk. That is something to sing about. Don't stop singing, even if it's through tears.

Posted by This Sunday Kinda Love at 9:32 AM