When I married AJ, we combined our furniture and took a good long look at both our collections and realized we had some decisions to make. After a few Craig's List ads, Target trips, and trips to the dumpster (to get rid of stuff, not GET stuff, who do you think I am?!), we created a hodge podge of furniture and decor that was officially The Steeles', not Leslie's, not Aj's but ours. We kept most of my Ikea furniture from my first apartment, ditched his southwest style couch I deemed "Old Apache" and made a list of "like to have" items for the future (King sized Sleep number mattress, I'm looking at you). A few of these pieces I inherited were nightstands that AJ got from his former job at a golf resort. They were revamping the guest rooms and he got them for a steal. Plain sturdy wood, they were usable. They weren't cute, but in the 24 months of moving in together, getting married, starting a new job (me), I just honestly could not be bothered. And then my first summer where I wasn't moving, in grad school, or getting engaged/married happened and I took to the Google....

There was NO need to replace these old wooden things for something new and fresh when I could REDO THEM MYSELF (errrr, we could redo them OURselves, AJ was helping me here). So I grabbed some paint samples at Lowe's and after tilting my head and looking at them in different lights (and having my family vote on their faves) we chose a a color and went off in search of how to do this thing.

Well, here's the project in numbers for you:
2 packs of sandpaper
4 visits to Lowe's
1 plastic paint tarp
1 nosy neighbor who kept stopping by and giving us tips
5 Face time calls to my father in law since he needed to not only hear my questions, but SEE the project as we progressed
5 hours of labor
2 coats of paint
10 you tube videos of "how to sand without a sander" watched
1 returned bottle of antiquing glaze (we were so proud of our finished job, we were NOT about to antique the mint off those things!)
15 references to "I feel like we're on Trading Spaces! Put us on HGTV!"
1 tested marriage (haha, jk)
and in the end....
2 cute new dressers with new hardware that are just begging for cute new lamps on them, wouldn't you agree?! Pretty proud that we did this ourselves and we had fun doing it. It might not be huge project, but in the end, it's our creation and AJ admits he thinks they look great. Why would he ever doubt me? After all, wasn't I right about Old Apache?

In case you're wondering about the process: We sanded them down with sandpaper blocks. Then, after dusting them, we painted 1 coat of paint. The next day, we added a second coat. The day after that, we did a coat of polyurethane ("shiny stuff" if you think like me). One more coat the next day, screwed in new hardware, and all done! 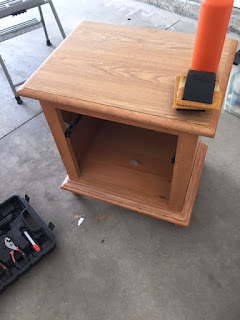 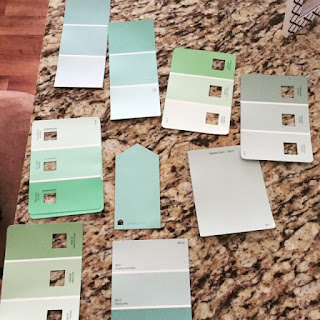 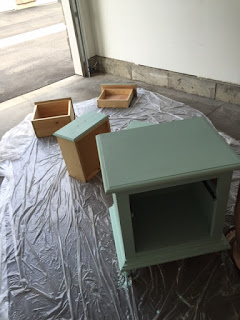 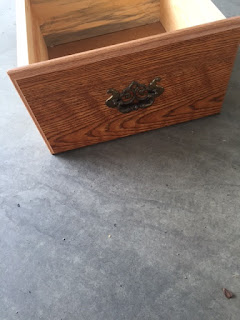 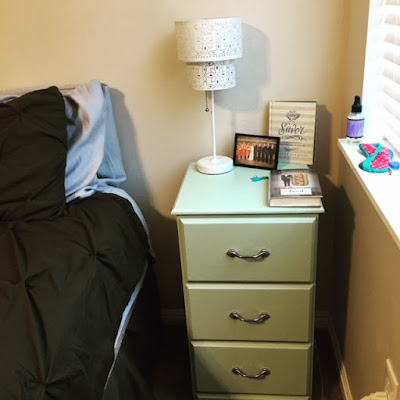 Posted by This Sunday Kinda Love at 11:34 AM